We were delighted to find out that the rain was going away and we would have sunshine for the Annual Walk for Life in San Francisco which was fast approaching. Elise Pinick, who is spending this month with us, and I were looking forward to participating in this year’s Walk.

It’s tradition that whether it’s the March for Life in D.C. or the Walk for Life here we would welcome the Sisters of Life who would be coming and they would stay here at our Home. Thursday evening the Sisters arrived from Denver and New York where our Sisters there know them well as they live very close to one another. We enjoyed having our supper together and getting caught up on what was happening in our respective lives.

Friday our other visitors began to arrive. One was named Mary. She is 77 but a very “young at heart” 77 years old. Originally from Vietnam, Mary feels blessed by God and because of that is very “pro-life”. She usually attends the March for Life in D.C. but because of the snowstorm this year her children asked her not to go. Mary has even been to a World Youth Day or two. She feels energized and edified by the young people she meets and the new friends she makes. We were also able to welcome a group of 14 students from the Newman Club at Arizona State University – one of whom has her own baby on the way. Another small group who came in from Gilbert, AZ, from St. Anne’s church; a group from Buckeye, AZ, from St. Henry’s Church with their priest; another Newman Club group from Oregon Tech coming from Klamath Falls, OR; and a group of 13 from Riverside, CA, who belong to the Survivors of the Abortion Holocaust Youth Group. A father drove here from Nebraska with two of his teenage daughters so they could participate in the events that lead up to the Walk and of course, take part in it. Also staying at our Home was a gentleman from New Mexico who belonged to the Runners for Life who also happened to be a retired diplomat and had many experiences to share – all of which were very interesting! We suspect, though, that his daughter, who has Down Syndrome, had something to do with him getting involved in the pro-life movement. Lisa Hamrick still arranges for the pilgrims to come here when we are able to accommodate them as she has been doing for us for so many years.

Friday evening Sr. Mary Paschal of the Sacred Heart, Elise and I went to St. Dominic’s for Vespers, the Vigil Mass and the Holy Hour. Mary, our 77 year old new friend, also accompanied us. Her pastor had told her that St. Dominic’s was only about 5 blocks from our Home. We assured her that it was more than 5 blocks and invited her to come with us. During the Holy Hour a couple gave their testimony on adoption as they have adopted 7 children through the years. They had a very different perspective from the one we were familiar with though, emphasizing how important it was that the birth parents stay in touch as much as they feel able to do so for their sake and for the sake of the children. They did not feel that this interfered with the love they had for these children as if they were their very own. It was a very informative talk as well. All of the children were there – from their late teens on down. Of course, the Dominican Pastor who gave the homily was very good and gave us what he would call the Mysteries of Life for the rosary beginning with Creation, of course!

The next morning, our large Cathedral was full – just as in the past…which is always good to see. Archbishop Cordileone’s homily was very good and several Bishops also participated.

We were able to go with the Dominicans – two of the Brothers come here for service – back to St. Dominic’s for breakfast after Mass. One of the Brothers who comes here went to Catholic University and knew our Home in D.C. We reminisced some about D.C. Two students from Thomas Aquinas College ate at our table with us. Then we got a ride back with the Dominicans to the Civic Center just in time for the Rally.

I was hoping by some miracle to get to meet Abby Johnson face to face but of course, that didn’t happen after the rally or during the Walk. As you know from watching it the speakers at the Rally were excellent. The idea with the ultrasounds and being able to hear the heartbeats of their babies was a great idea. Mary accompanied us for most everything but the Walk itself as she wanted to go with another group. Elise and I joined up with the Dominican Friars and Brothers and we prayed the rosary all together for almost the entire Walk.

There really were not many protesters at all. As always, it was beautiful to meet people of all ages, young, old and in-between. There were some Religious there, though not a lot. The Sisters of Life and the Dominican Sisters of Mary, Mother of the Eucharist and the Sisters and Servants of Our Lady of Matera. They were the largest groups. There were others just less in number – all of us there to support the Right to Life. There were some 50,000 people who walked according to a secular news report. Not sure how accurate that was but I was surprised to learn that this is the 2nd largest walk for life in the country. Imagine, San Francisco!

After the Walk, Elise and I were taking the bus home. What we didn’t know was that they had been re-routed so after walking to the place where we thought we could catch the bus we discovered that it wasn’t going to stop there and that we needed to return back near to where we began so we did another Walk for Life of our own. On the way though as we were walking I looked at this person coming towards us and I said to Elise – that’s Abby Johnson! She nodded. So I went up to her and asked “Abby Johnson?” She smiled and said yes so I proceeded to tell her how much I admired her work and what she does and her book. Then I asked if we could get our picture with her and she said yes. I assured her of our prayers and she also shared that she is praying for us too as she follows our case.

We finally made it to the spot where our bus was supposed to come and as we were waiting, lo and behold, we looked up to see Mary, our 77 year old friend, who was trying to find her way. She suggested we walk home as the bus was taking a long time to get here. Once again we assured her that that would be a very long walk indeed. The three of us took the bus home together and she went on to Star of the Sea for the barbecue put on by the Knights of Columbus where the Sisters of Life and other young people who would be participating.

The Residents were happy to hear about the Walk when we returned and told us they had been praying for us. I have more pictures but these capture the people we know and the spirit of the events. 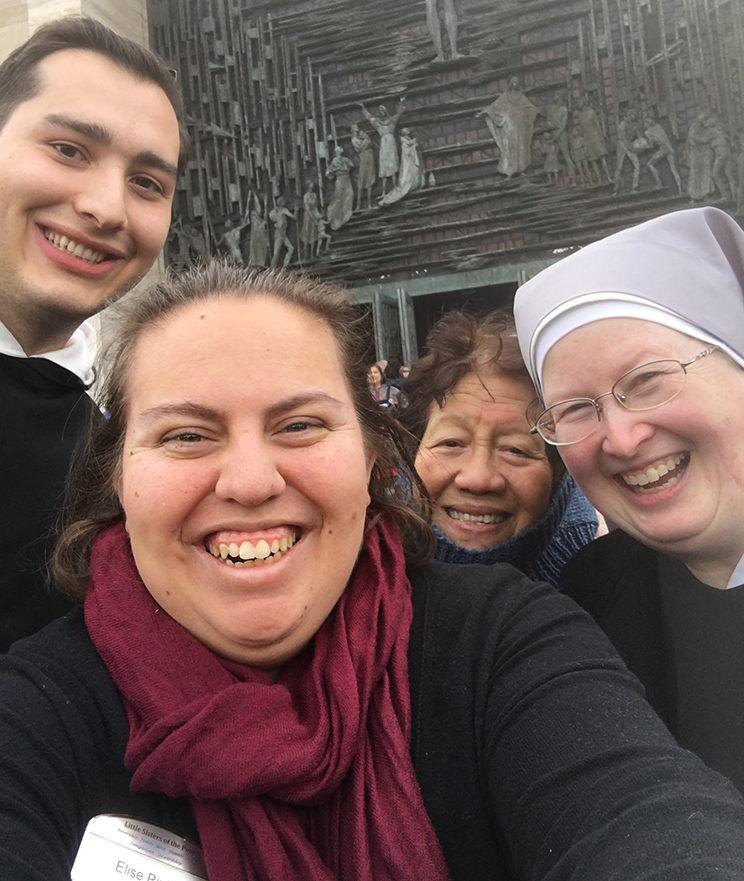 Bro. Jose, Elise, Mary and Sr. Diane at the Cathedral after Mass 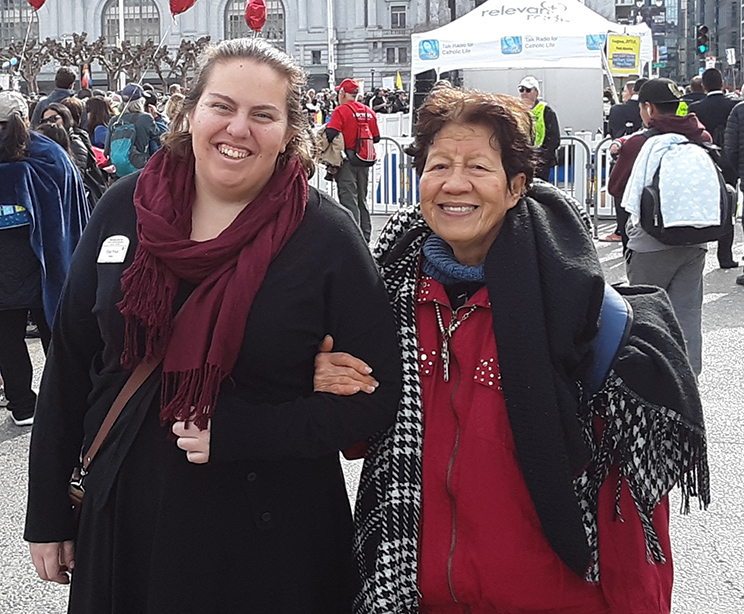 Mary and Elise arriving at the Rally 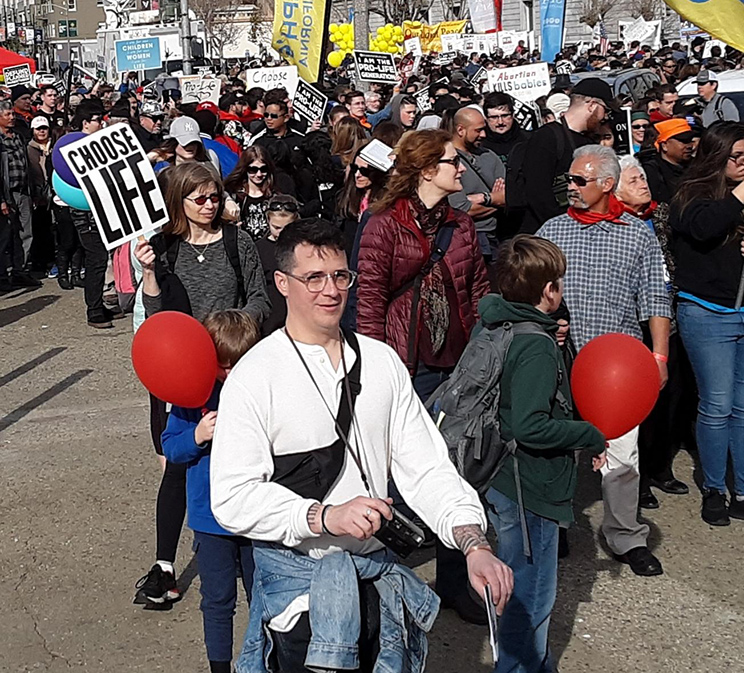 Lining up for the Walk 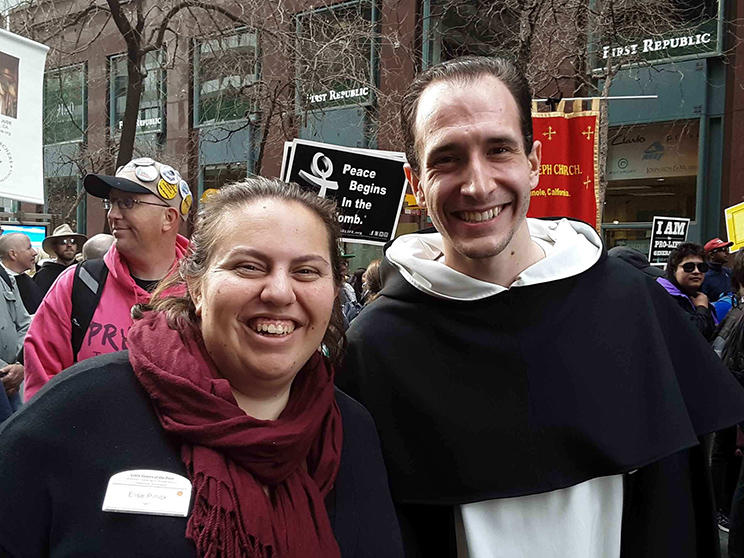 Bro. Philip and Elise as we walked 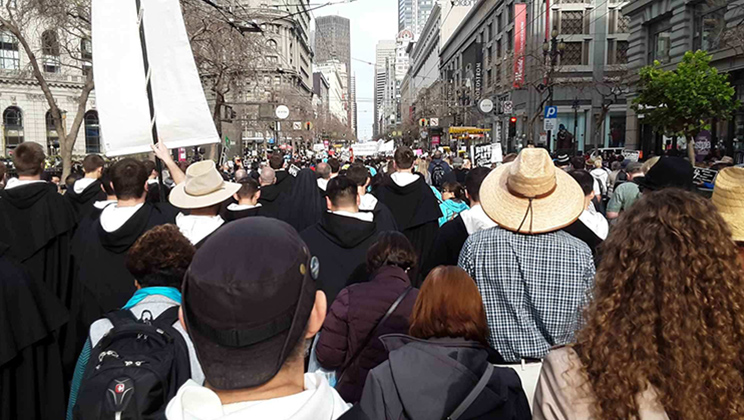 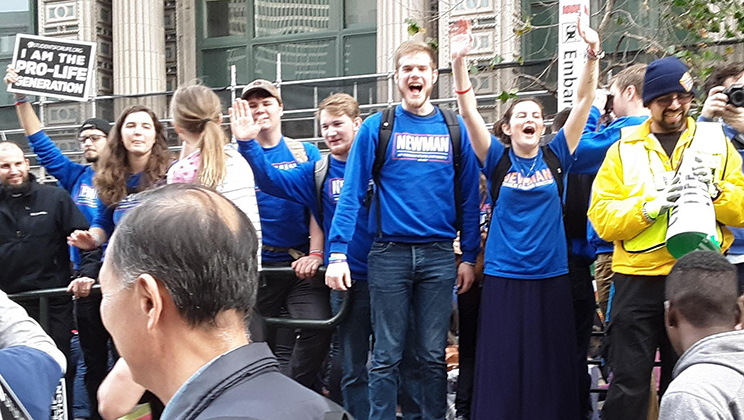 ASU students Newman Center staying at our Home on the walk 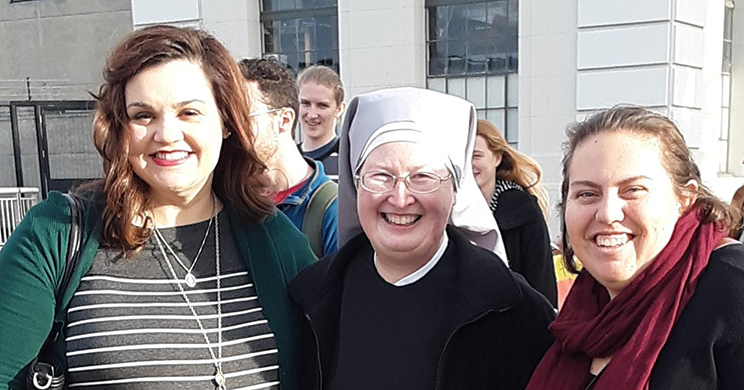 Ringing in the New Year at St. Anne’s
The Bear Class Pays a Visit to St. Anne’s