The Little Sisters Walk for Life 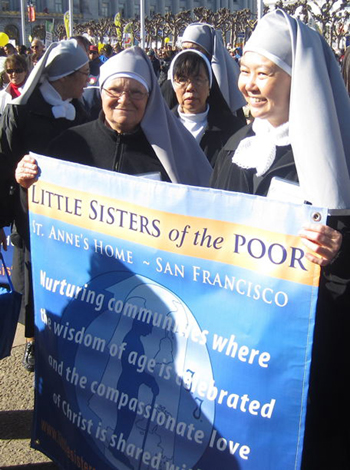 In its ninth year, the 2013 Walk for Life West Coast took place on January 26th in San Francisco. For the Little Sisters, the day began with a standing-room only Mass at the Cathedral of St. Mary of the Assumption. Archbishop Cordilione was the principal celebrant joined by Vatican Ambassador to the United States, the Nuncio, Archbishop Carlo Maria Vigano, who read a message from the Pope and gave the Papal blessing to the congregation that came from all over the United States.

Mass was followed by a rally at Civic Center Plaza and the walk with a record crowd, estimated at over 50,000 people, filled the streets of San Francisco from City Hall to the Ferry Building. Many parishes and religious congregations were represented, but of significant note were the overwhelming number of young people present.

Five of our Little Sisters and a novice had the joy of being a part of this important gathering of people that represented not only different geographic locations, but also different cultures and age groups united together celebrating the sanctity of life.

“His Holiness
is grateful to all those who take
part in this outstanding public witness
to the fundamental human right
to life and to the moral imperative of
upholding the inviolable dignity of
each member of our human family,
especially the smallest and the
most defenseless of our brothers and sisters.”