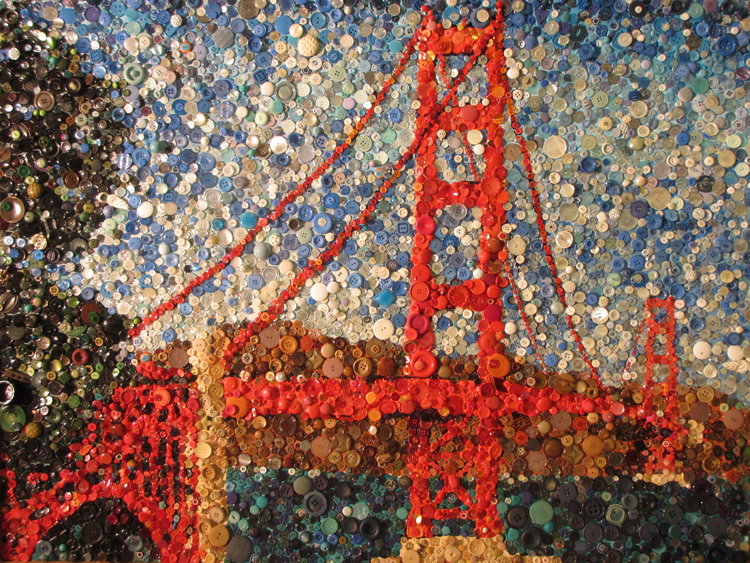 Creativity has no expiration date.  At age 96, Peg Webber, our Queen of Buttons, is a clear testament to that. From a stock pile of thousands of buttons donated to St. Anne’s over the years, came the genesis of her creative enterprise with buttons. They came to St. Anne’s in sewing kits, boxes, bags, and in all shapes and sizes. She started by simply sorting them, but sorting them without purpose was not quite enough. She decided to put them to use by making bookmarks and cards and even some jewelry, but her true inspiration came after going to a mosaic art show at the Legion of Honor in San Francisco. The masterpieces at the exhibit truly intrigued her and, alas, the concept of a button mosaic was born. Her idea: to celebrate the 75th Anniversary of the Golden Gate Bridge on a 48 x 36 canvas with buttons!

Eight months and 4,587 buttons later, Peg created her very own masterpiece, which now graces the lobby of St. Anne’s Home. She worked on her project under the direction of our Creative Arts Director, Tim Lobacz. Together they sorted buttons, tinted glue, and as needed, even painted the buttons, but it was Peg who devoted an average of 7 hours per day for 8 months toward the endeavor. Peg speaks fondly of her time devoted to her recently completed work and is looking forward to her next project. She eagerly exclaims, “I’m back to sorting buttons with some good ideas in mind for the next venture!”