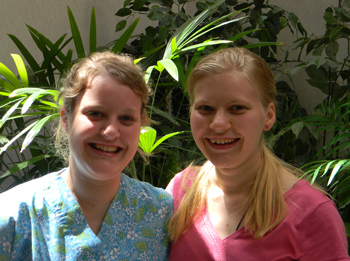 Friends had told me about the Little Sisters, but it was my own sister who convinced me to apply with her to the Sisters’ “Spring into Service” Live-In Service Program. Although raised in Oregon, I’ve been spending most of the past two years at college in Indiana—but within a few months I found myself warmly welcomed to San Francisco as if it were my own home! This summer at St. Anne’s, I’m helping with activities for the Residents and odd jobs, but mostly I find myself spending time in conversation over meals, in the hallways, or at a Resident’s bedside. From this, I’ve learned that it takes time to have a meaningful exchange, that listening is an all-attention-demanding task, and that if seconds of silence elapse before a reply comes, that’s just part of the conversation.

Sometimes my job means learning the piano from an accomplished former-teacher, paging through the albums of an old designer, or just sitting in the sun with fellow nature-enthusiasts. Or I go on outings, help with acting games and join in physical exercises. The tasks are varied, and I never know what one day will bring, but one thing I learned immediately here at St. Anne’s: contrary to all that college might suggest, life does not need to be rushed. It’s a most beautiful thing to walk slowly, allocate time abundantly and fully enjoy another’s company.

Born and raised around Portland, OR, and a university student in the state of Washington, people often ask me how I came to stay with the Little Sisters in San Francisco, and I’m not entirely sure! It must have been the Holy Spirit who sent me to the Little Sisters’ website, because I can’t remember how I got there. As a nursing student who is happiest working with the elderly, I loved what I read about their mission. Another bump from the Holy Spirit, and I found information about a program where students could visit the Sisters. I sent an email to the address listed, and several emails and a few phone calls later I was set to spend my summer here in San Francisco!

When I arrived I was welcomed with open arms by both Sisters and Residents, a joyful testimony to the hospitality that is central to the Little Sisters’ community. When I began to eat meals with the Residents, join in Mass and daily prayers, and work in the physical therapy room, I continued to see joy in everyone in the home. Residents arrive in my physical therapy room with a smile on their face and leave even happier after a few exercises or a nap while warming arthritic joints with a heat pad. What a blessing to be able to spend my summer here, joining the Sisters in their mission of “making the poor happy,” as St. Jeanne Jugan encouraged, whether it be with a heat pad, a manicure or small conversation.