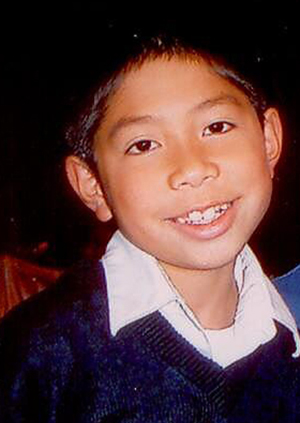 Taylor Fong, a fourth grader at St. Thomas the Apostle School in San Francisco, was the top seller in the school’s chocolate sale in September. As part of his prize, he won $200.00 cash. His parents insisted that he put half of it in the bank, but that he could spend the rest on whatever he chose.

Taylor decided to give $25.00 to each of his parents as a thank you for helping him to transport the thirty-five cases to the locations where he sold the chocolate. He gave $25.00 to St. Thomas the Apostle Church as a thank you for his education in following the footsteps of Jesus. The final $25.00 he chose to give to the Little Sisters of the Poor.

He visited St. Anne’s Home twice as a third grader, and had not forgotten what he learned of the work of the Little Sisters from his teacher. He had firsthand experience of the family atmosphere at St. Anne’s when he visited with his class to entertain the residents and to participate in the May Procession to honor our Blessed Mother. His class wrote letters to the residents for each of the major holidays, as well as delivered letters personally to the residents on each visit.

St. Thomas the Apostle School has an annual food drive for St. Anne’s Home at Thanksgiving, and a “Giving Tree” of gifts for the elderly at Christmas. Taylor wanted to make a difference in his own way, and chose to use his winnings to help out the residents.

A second chocolate sale was held in the second half of the school year, and once again, Taylor was the top seller. The Little Sisters of the Poor was once again the recipient of Taylor’s generosity. Taylor gave $25.00 to the Sisters to help with their work with the elderly poor. This was half of his earnings from the second sale. The second half went to the church.

Taylor has truly set an example of looking after the needs of the elderly poor. His third grade teacher, and the St. Thomas the Apostle School community, and are especially proud of Taylor.