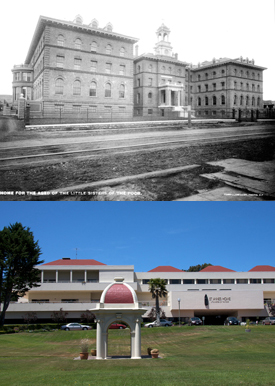 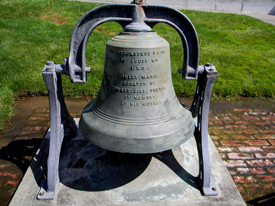 Edward Joseph LeBreton, one of San Francisco’s most successful businessmen of the early 1900’s, quickly took an active interest in the Little Sisters’ work on Howard Street and told the Little Sisters, “It is for God that I am giving. I will give you the home—complete—regardless of the cost…” Le Breton placed only two conditions on his gift. The inscription, “In Honor of My Father and Mother,” was to be placed over the door of the new home. And in recognition of his devotion to the mother of Mary, he hoped that St. Anne could be the patron of the new home. On May 15, 1904, the doors at St. Anne’s Home on Lake Street opened to greet its first 121 Residents.

In 1977 St. Anne’s Home was declared unsafe in the event of a fire or earthquake. Thanks to the kindness of many benefactors and volunteers, groundbreaking for the construction of a new home took place on April 25, 1979.

The memory of the old home built by LeBreton is kept alive by the bell named for his mother, as well as the cupola of the old building, both centrally situated on the front grounds of the home. The caption in memory of LeBreton’s parents now sits prominently in the garden alongside the grotto.

St. Anne’s continues to depend on benefactors, volunteers, and friends as well as the staff members who partner with the Little Sisters in contributing to the happiness and well-being of their elderly brothers and sisters. We know that because of their goodness to the poor, these generous individuals will be greatly blessed.

Admission to St. Anne’s Home
Who We Are