The Little Sisters of the Poor welcomed me to St Anne’s home a few weeks ago for their Spring into Service summer program for young women. In the short time I have been here at Saint Anne’s I have been struck by the overwhelming presence of God that is here. It seems so easy to find Him in the shortest of conversations and in all of the joys and sorrows of daily life.
At first glance the Residents seem to have pain-filled lives with a complete lack of any kind of independence and it is hard to see God in that. However, as I get to know the Residents and their stories better I keep seeing His guiding hand. Through all of their lives, in small moments and big decisions, God was working through each of their lives to bring them to Himself. God loves each one so much and has led them to a peaceful life here at St. Anne’s home. Their suffering does not mean that God has abandoned them. 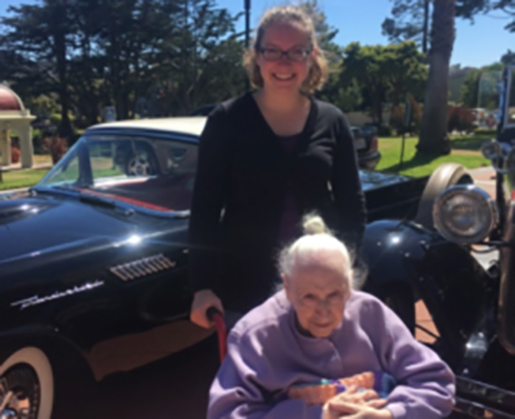 God is not only found in the larger paths of the Residents, lives but also in the smallest moments of daily life here at St Anne’s home. He is present when Leticia and Henry sit together, when Oma’s son visits her and when Sister Diane searches for a snack for Melva. He is there when Thomas guides Lisa down the Communion line, when Fran smiles, and when Amy wins another game of Bingo. He is found when Annabel soaks up the sun beside the Lourdes grotto, when YK eats his breakfast, and when Peg gets a long nap. God is present in their every moment.
As I see how God has taken care of each of the Residents it becomes easier to trust God with my own life. Although I was worried and nervous about coming all the way to San Francisco, I know now that God guided me here and that he has plans for my summer here at St. Anne’s Home.

After a few weeks…
During my time here so far at at Saint Anne’s Home in San Francisco I have been reading about the foundress of the Little Sisters of the Poor, Saint Jeanne Jugan. She was a brave woman who gave her life to God by caring for the elderly beggers who were so common in post-revolutionary France. She opened her home to them, even giving up her own bed. She and the followers she attracted cared for and begged for the elderly. Before long, more homes for the poor were opened across England and France and, as more followers flocked to her, a religious community was founded. 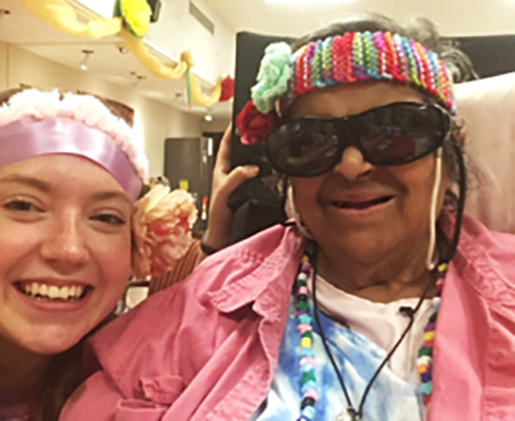 Jeanne Jugan’s spirituality is primarily based on poverty. She said, “It is so good to be poor, to have nothing, to depend on God for everything.” She wanted to care for the poor while becoming like the poor. The Little Sisters rely on begging for their needs because Saint Jeanne Jugan wanted the community to always trust in the Providence of God. Like Mother Theresa, she saw God in each person that came to her doorstep. She served each person as if they were Jesus. She said, “Love God very much, so that you can look after the aged well, for it is Jesus whom you care for in them.” 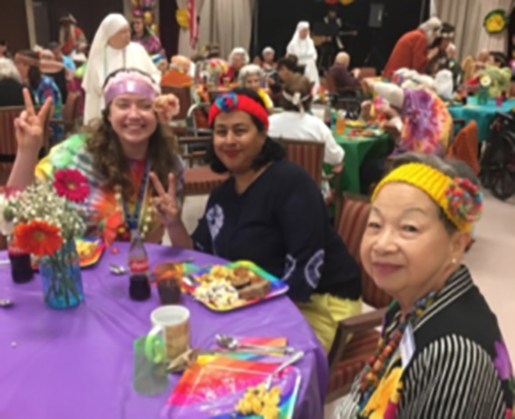 Here at St Anne’s, Jeanne Jugan’s ideal of caring for the poor is realized. The elderly here are well dressed and well cared for — one would not guess that they are poor. Their dignity and independence are protected and respected by all. They are welcomed and encouraged to participate in daily Mass and other activities such as bingo and karoake. Friendships between the Residents are very common. St Anne’s becomes a home for a very large, very diverse and yet very close family. Each Resident has the opportunity to form relationships with the Sisters, staff and other Residents as they eat together, pray together and play games together. This feeling of having friends and being at home helps the Residents age gracefully and comfortably without fear of the future. They know they will be cared for and loved until the very end.

The more I learn about Saint Jeanne Jugan the more I see how much her work influences our life at St. Anne’s. She said, “Making the elderly happy — that is what counts!” This maxim is lived out here as the staff and Sisters strive to help the elderly. It is beautiful to see how God has used Saint Jeanne Jugan and the Little Sisters of the Poor to bring joy to the lives of so many elderly — even over one hundred and fifty years later in San Francisco!

A Celebration of Love
A Swing and a Prayer