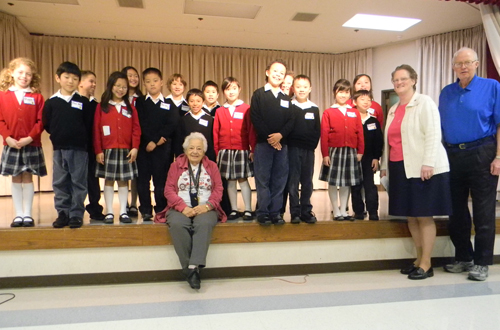 As a part of their efforts to honor the elderly during the  “Respect for Life Month” this October, the students of St. Thomas the Apostle School were challenged by their third grade teacher and a member of our Association Jeanne Jugan, Barbara Anderson, to raise money for the cost of a commemorative brick at St. Anne’s Home. The goal was to have a brick in their name, with funds that were raised by the students. Mrs. Anderson and her husband kindly offered to match any funds raised during the first week of the campaign.  They raised a little over $350.00 in the first week.  Some students donated their allowance, some gave their prize winnings from another fundraiser, some even gave up treats before Halloween to use the money for the brick.  In a total, the elementary school students at St. Thomas Apostle raised $560.11, with the addition of the matched funds provided by the Anderson’s, the final total was $916.00, allowing the students to purchase a total of four bricks, one small and three medium bricks.

We are so thankful for this manifestation of God’s Providence through the kindness of the Anderson Family and the children of St. Thomas the Apostle School.

The Elderly Are a Blessing (Catholic San Francisco)
Christmas Event Quite an Event!