A Miracle in our Midst – the Gatz Story 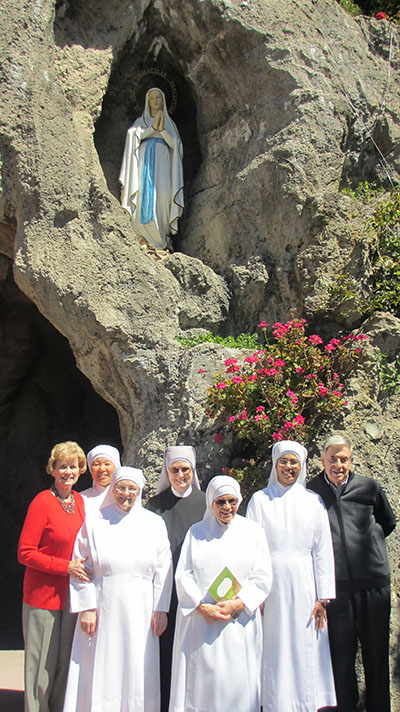 In 1989, Dr. Edward Gatz was diagnosed with invasive cancer of the esophagus and expected to live no more than six months. Today, Dr. Gatz is cancer free and he and his wife, Jeanne, passionately share the story that begins with a devastating diagnosis and ends in something that can only be described as miraculous. We were honored to have Dr. and Mrs. Jeanne Gatz recently visit San Francisco and share the details of their journey to the miracle that led to the canonization of St. Jeanne Jugan, the Foundress of the Little Sisters of the Poor.

Twenty-four years ago Dr. Gatz expected to die. He was depressed and not even interested in thinking about the next day. He declined to undergo conventional treatments as he was told that they would not cure him and likely not prolong his life. The first thing Mrs. Gatz wanted to do was to pray and to get everyone to pray with her. Seeking solace, she contacted her old friend, Fr. Richard McGloin, S.J., who had been not only her professor, but was also a former chaplain for the Little Sisters of the Poor. He immediately encouraged her to pray to Jeanne Jugan. Along with Mrs. Gatz, Fr. McGloin prayed to Jeanne Jugan every day. Dr. Gatz was given the sacrament of the anointing of the sick three times and he explains, “A most unexpected and powerful event took place for me after receiving the anointing. There was a sense of peace and joy, almost euphoria, and each time was more powerful than the one before.” From that point, Dr. Gatz was ready to take it all on. Surgery was performed to remove the fist-sized tumor from his esophagus because if not removed, it would block his ability to swallow. The surgery, which removed most of his esophagus and stomach, had a very low success rate, but time passed and Dr. Gatz was still alive. 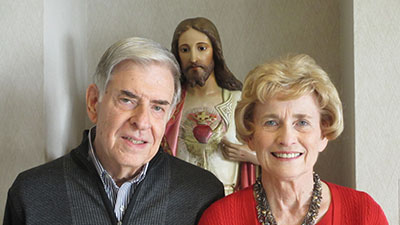 Dr. Gatz is often referred to as the miracle doctor, but he fervently clarifies, “I am not a miracle, I am the recipient of a miracle.” He goes on to further explain, “The miracle was not a snap of the fingers. It happened over time. To this day, functions continue to come back.” When I asked Mrs. Gatz how long she prayed to St. Jeanne Jugan, she looked at me somewhat surprised and said, “Oh my, I’ve never stopped! The main thing is to have faith, and that is what has gotten us through.”

The Gatz story is one that inspires faith, motivates hope and, much like the work of the Little Sisters, uplifts the spirit. It was a privilege to have had them in our midst.

A Swing and a Prayer
Support our 2013 Brick Campaign